It was ages ago when Pauline and I entered this, stuck it in my calendar never gave it another thought, then just went from big race to recovery sliding seamlessly into taper then race, recovery, taper, race recovery, taper, just gently ticking over in between West Highland Way, Fort William Marathon, Glenmore 24, then a wee special mention at Loch Ness Marathon, there were five of us that have completed all fifteen marathons, 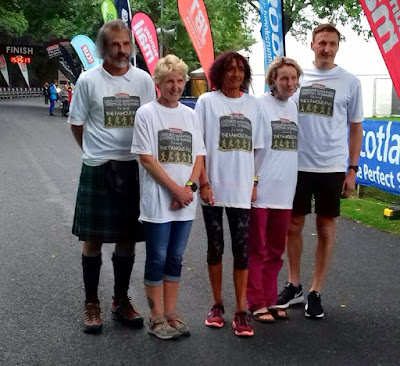 we were give a commemorative t-shirt and a hamper full of Baxter’s stuff, I won’t have to buy soup, jam or chutney for ages! Then all of a sudden it was a week before the Dunoon Ultra, better read the bumf then! Yikes, we should’ve booked the bus to the start at least a couple of weeks ago, but a fast reply from Colin to my email allayed my concerns.

We’ve only been to Dunoon once before, many years ago for Graham Clark’s funeral, a fellow Carnegie Harrier, he died suddenly at a race, a great coach and Scottish International runner, we still do some of his sessions, the 700 metre loop in the Industrial Estate and my favourite, the winter hill sesh in the Public Park, I still miss him popping up on the route. On that day I didn’t pay attention to how we got there so Google and the AA route finder was my friend, coming from Dunfermline it would be a quite a trek with the choice of a long drive round or a car ferry or a passenger ferry, we opted for the passenger ferry as it was right at hub of the race.

Pauline picked me up at 5.00am and the drive to Gourock was quicker than we expected, we were on the first ferry at 6.45am, so had plenty time to register,

take advantage of the free coffee and pastry at Coast Coffee, the cafe at the pier before getting ready to be bussed to the start, just a 15 minute journey to the Benmore Botanical Gardens, even more free coffee, tea and pastries were available for the runners.

We were sitting with Mike and Kathy, he’d done the loop from the Gardens in training and thought the race would probably be longer than 33 miles, glad to be forewarned but I wasn’t too concerned, trail race mileage is usually a bit of an estimate. Silke was describing the route too, she’d used it in training for one of the UTMB races and we would be doing a Munro’s worth of climbing.  Ok, time to revise my predicted finishing time, I thought I’d be roughly around the same as Glen Ogle 33 but now I was glad a head torch was a part of compulsory kit, I might need it!

The Dunoon Ultra isn’t just a race organised by runners for runners, the local community were behind it too, tragically five weeks ago a local lad, Olly, lost his life in an accident, he was twelve years old and an avid sports fan, Liverpool football club was his favourite, it was an honour and fitting for all involved in the race to wear a red ribbon in support of his family. 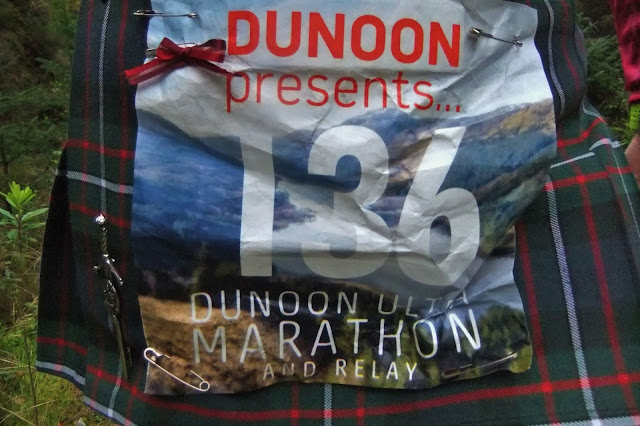 The start was in the shelter of magnificent Giant Redwoods, Pauline walked round one counting her arms width around it. It would need seven Paulines holding hands to encircle the massive trunk! 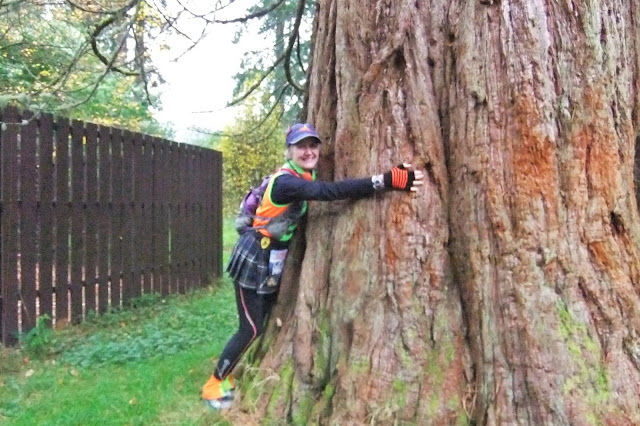 10.00 am, we were off with a race start like no other I’ve done before, there was no countdown, Pipers played the intro for a stand of wee cannons, we were warned they’d be loud but I still leapt at least a foot in the air when they went off. 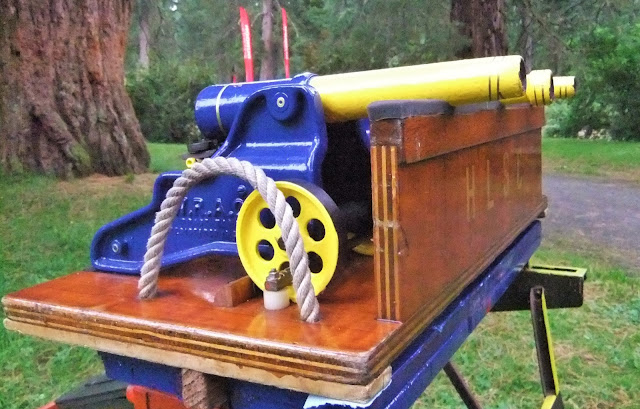 A gentle trot over a narrow bridge, along a little lane and into Pucks Glen, a magical, dark,enclosed wood with rocky, twisty paths, waterfalls, wee bridges, and shady mossy nooks and crannies you’d expect to find fairies and elves hiding. 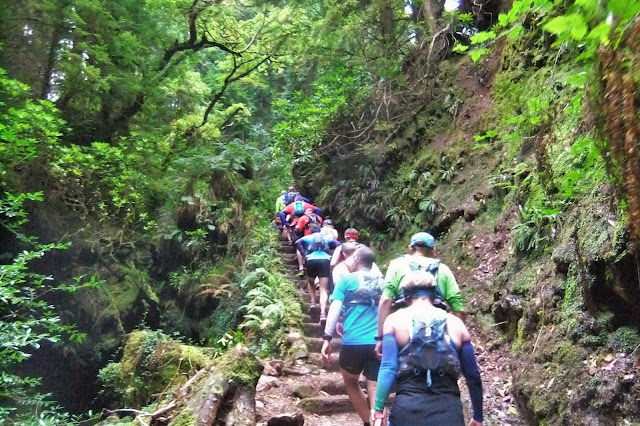 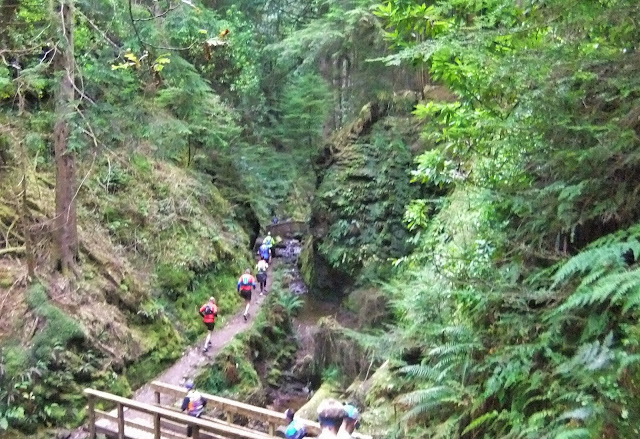 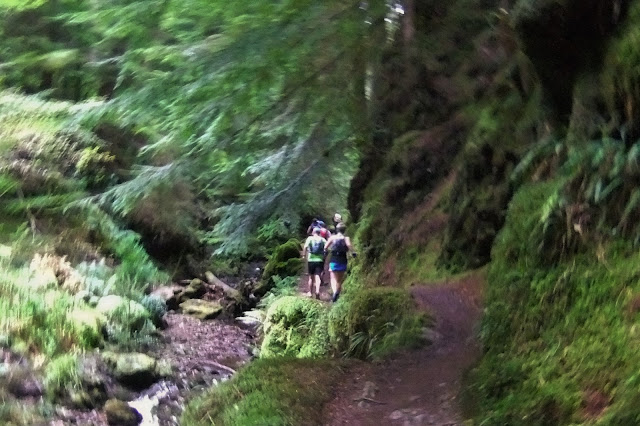 The path opened onto a wide forest track and we started to climb, with some quite steep zig zags I kept it at nice easy walk/run there was some easier gradient but still always up, Audrey and I were running together, Andy was with us for a bit too, we paused a few moments at the radio masts for a few photos looking down over Loch Eck, stunning! 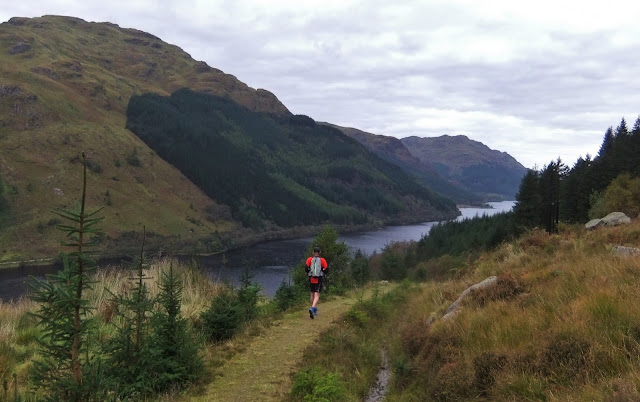 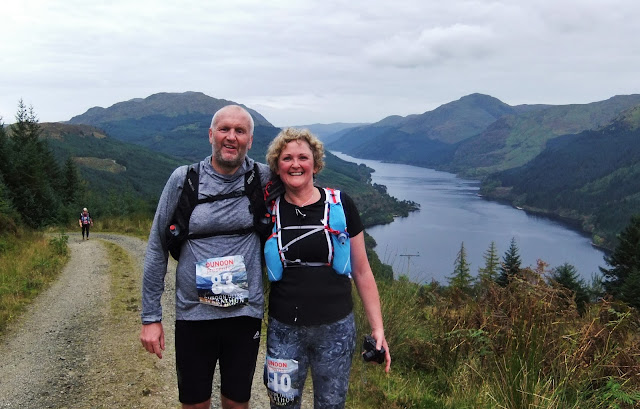 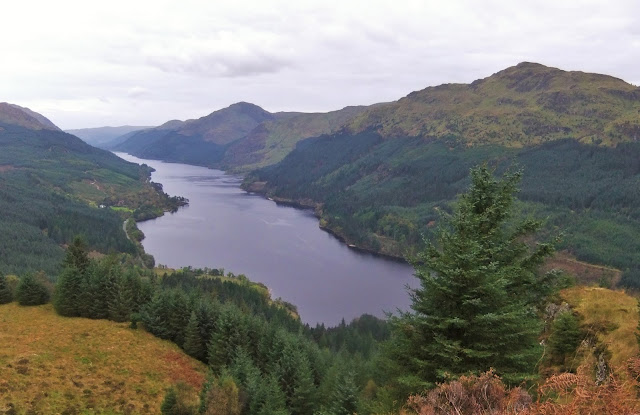 I do understand the concept of a race. but the time on my watch has no relevance when I have views like this!  After such a long climb there was a long descent, Audrey and I parted company when I nipped into the bushes for a pee.

I didn’t have a drop bag for the first checkpoint and caught up with Audrey as she was sorting through hers, we were running evenly paced and great to blether the miles away, she was there to help me up after my muppet fall, I was fine, no damage, just the heel of my left hand was bleeding, pfft! The bit that’s just healed from the fall at Glenmore 24, she offered me an antiseptic wipe, but I just wipe the blood off on my kilt, (it’s not just a fashion accessory, it’s main use, a token of modesty when I crouch at the side of the trail for a pee)

Once on the flatter side of Loch Eck we could hear cheering from the opposite side, and looking across we could see a wedding, what a beautiful place for your special day, I wished them well, pity my running camera has a rubbish zoom! 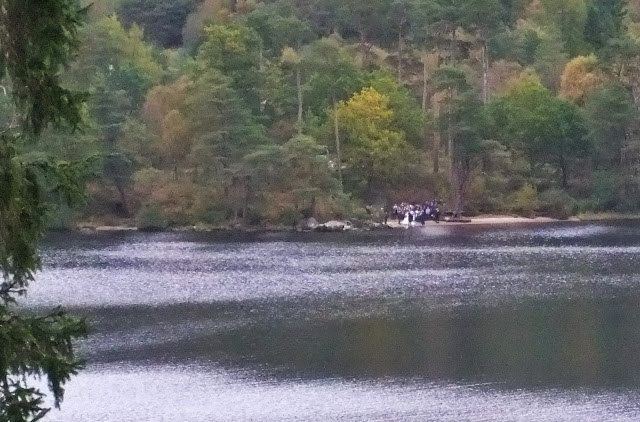 I clicked into my cruise pace and kept it going on the gentle tarmac ups, Audrey was having a small dip and told me to go on, I think we covered nearly twenty miles side by side, there was no pressure for us to stay together but it didn’t feel quite right to separate but everyone has to run with their own highs and lows.
I was happy to carry my custard in a Fill n Squeeze pouch, a couple of gels and a Flump but a wee can of coke is better if it isn’t shoogled for fourteen miles first, so I put that into a drop bag for the middle checkpoint, and what a helpful bunch of marshals, my water bottle was filled as I drank my coke, they took my rubbish and asked if there was there anything else I needed. Approaching Benmore Gardens and the last checkpoint I just cruised through without stopping, shouting that I didn’t have a drop bag as I arrived, but again I was offered water, a wee cup of coke, I felt rude refusing, what a fantastic bunch of helpers! 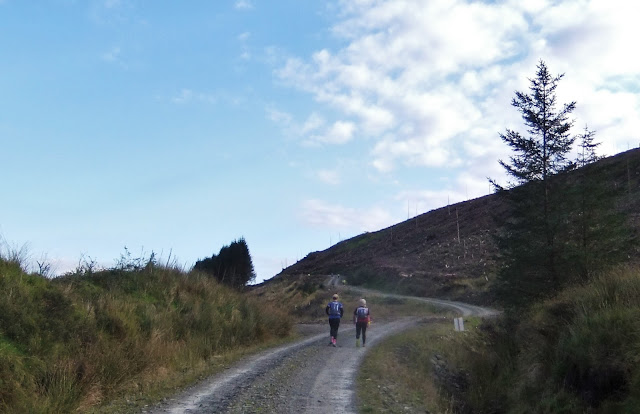 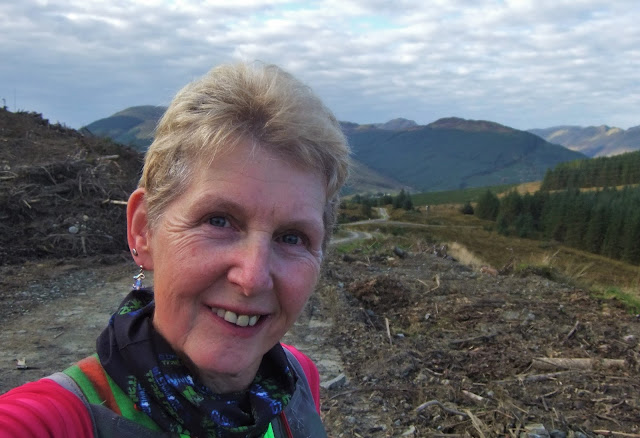 Looking ahead I could see a bright yellow marker with a big number 5, ok that’ll be five miles to go then, still a fair bit but I’m in the last hour, both Pauline and I have a rule, it doesn’t matter how long you’ve been out or how many miles you’ve done you can always push the last hour. I swapped my I’m-just-out-for-a cracking-day-on-a-beautiful-route head  for my race head and I could just about taste the beer at the finish, (there’s nothing like the thought of a pint to pull you in, that’s not just me, is it?) Another big yellow mile marker. Brilliant!  We were being counted down each mile to the finish, I trusted they were accurate and pushed on.  Finally the route plateaued and even started to go down, I could see Dunoon, 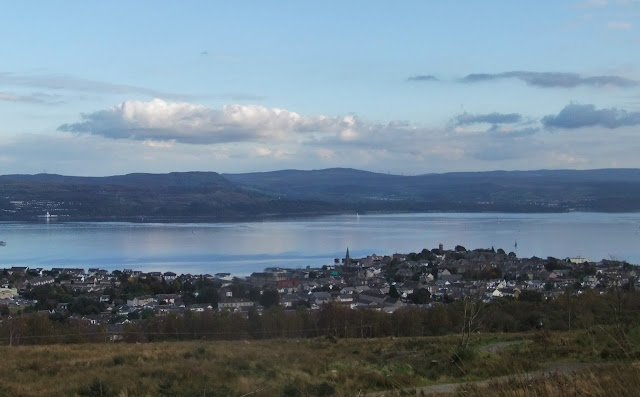 it didn’t look too far away and I could see a path that looked as if heading straight down to it… Bugger! There’s red and white tape across it barring the way and a yellow arrow pointing towards the path that went up!  The route had been well marked, there was never any doubt of going wrong, even our Ray McCurdy would be challenged to go wayward on this course, so I humphed upwards. But it wasn’t long before it descended fairly steeply, a wide forest stoney path reminiscent of the path down to the Braveheart car park in the final miles of the West Highland Way, I felt strong and battered downwards, maybe because I was comparing this to heading into Fort William, my legs were supple and still had bounce in them in comparison. I was working my arms and breathing deep, keeping the momentum that gravity gave me, onto the Esplanade and the final mile pushing all the way, a tight right turn and into the finish on the pier.  Fantastic!

(Not going to bore you to death with the splits but those last two miles were my fastest and the last one was the only one under ten minutes, paced to perfection if I do say so myself, my Garmin gave me 34 miles and 3,648ft of ascent but we all know how random that can be)

I just loved the whole race and it wasn’t hard to finish on a high. I was handed a t-shirt, a goody bag containing wine and a specially made cup-cake, I was also handed an opened bottle of water and  bottle of beer, I didn’t have enough hands! Inside there was hot food, tea, coffee and even more cakes and biscuits. I was blown away by the race memento, a unique plaque made from reclaimed wood from the restoration of the Victorian pier with a Giant Redwood tree at the race start cut into the design.  I feel I have brought home a little piece of the heart of Dunoon. 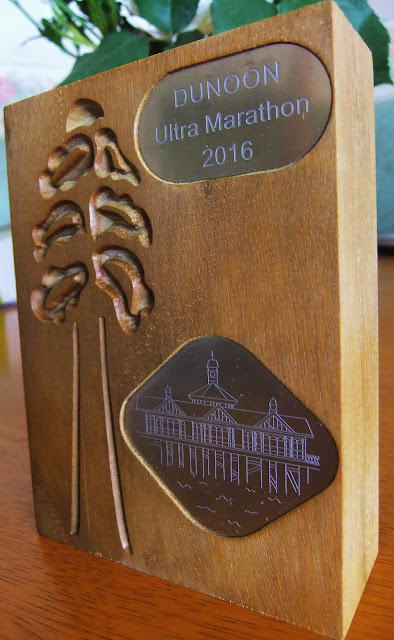 For an inaugural race there is always a possibility of some wee teething problems but if there were any I was not aware of them, a class event from start to finish, complimentary breakfast at both registration and race start, enthusiastic friendly helpers and marshals throughout, a stunningly beautiful well marked route, great reception at the finish, pity I didn’t feel like dancing but I think the ceilidh band were quite understanding.  Would I change anything? Yes, I think staying in Dunoon for Friday and Saturday will be far better than driving at daft o’clock in the morning and heading straight home afterwards, hope to have a bit more time for beer next year. When do entries open? I’ve got another ever present to maintain.
Posted by Fiona Rennie at 09:41

Hi Fiona, glad you enjoyed your day out and plan to stay next year. Not sure but I think the race is starting earlier next year on the 7th of October 2017, just check with the race committee. I have added a few more pictures since your blog, and this includes your podium shot, if you want to update the blog that's fine. Spread the word that Dunoon has a cracking wee Ultra !!!
Cheers for now ken clark photography.

Thank you Ken, I've updated the podium shot, yours is far better than the one I took of Pauline and I'm in it too! :)

Yeah, I think a 9.00am start or even earlier will make sure more people finish in daylight.

Sounds like a great day out and a lovely event...I'm off to pencil it in for next year! 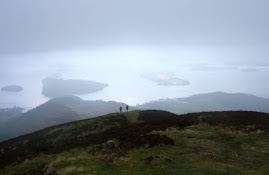 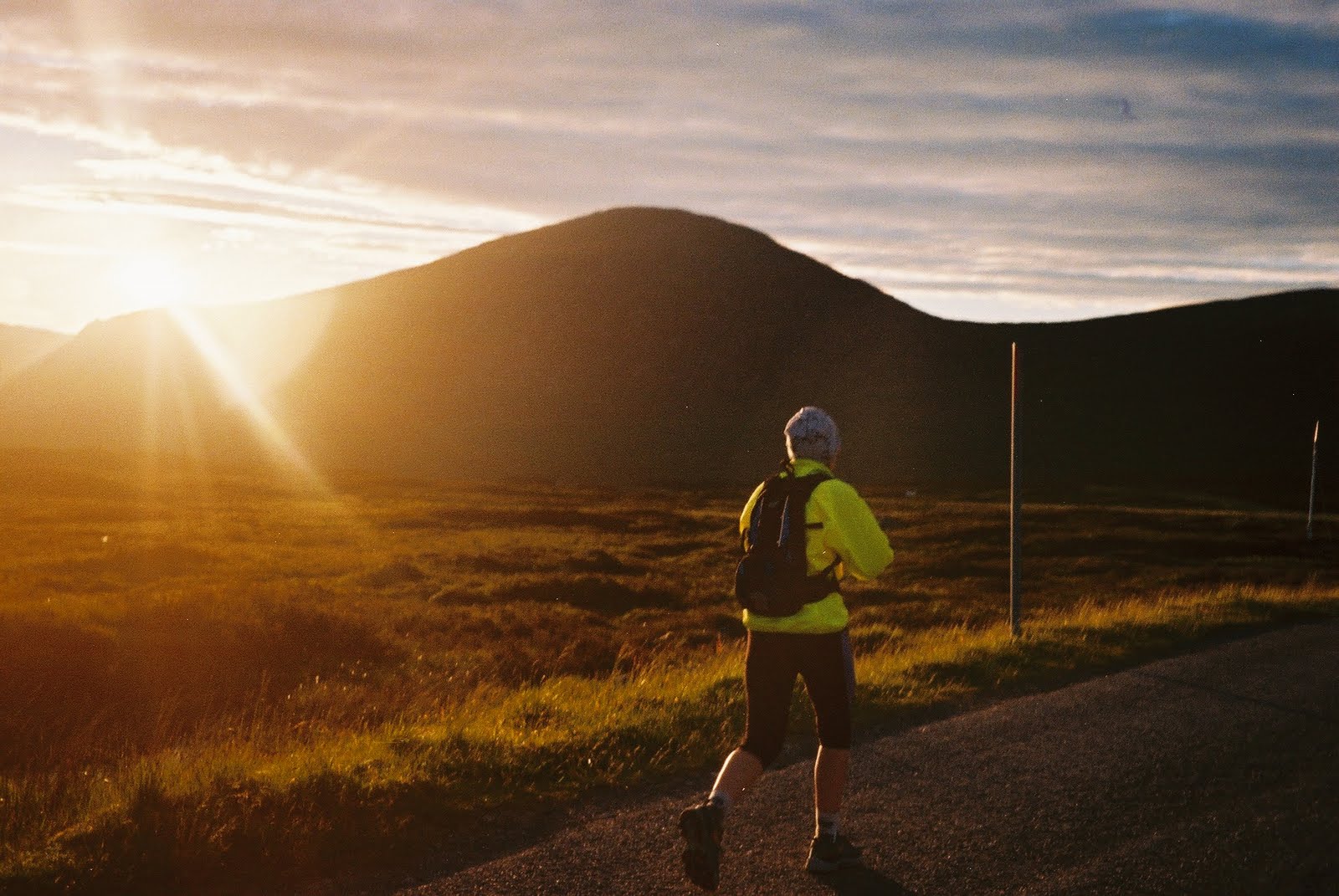